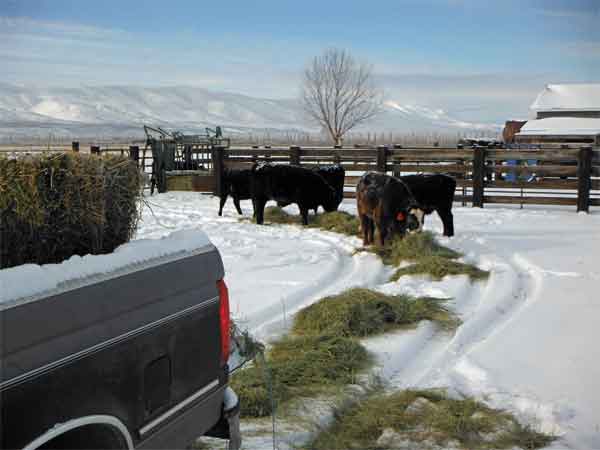 As March closes out, I am thinking about the days leading into March. We’d had a fair amount of snow. It was nothing like the snow of our neighbors across the American landscape, but for the farm, plenty enough.

Low temperatures and snow come hand in hand and like the snow, it has been plenty cold enough. Cold weather though calls for more feed, which of course, means more work. More work, however, isn’t all that bad. Each winter we fence the hay fields, turn the cattle out, and let them forage open range. The hay fields provide plenty of feed all winter long. So, when the bottom drops out of the thermometer, and we begin feeding hay cut from last summer’s hay fields, life is just fine. And after all, we figure a little extra food enhances the physical and spiritual wellbeing of cattle.

Though we’re a long way from the ideal, society is slowly beginning to grasp the physical wellbeing of their food animal matters. However, when it comes to thinking about a food animal’s spiritual wellbeing, society remains out on the back forty. Our current blindness around animal spirituality has not always been the case. Christians at one time, e.g., Thomas Aquinas and Francis Assisi, believed the Creator imbued plants and animals with soul. That is crazy talk though today. Sure, we might allow for an animal soul possibility when we have Annabelle the cat or Hank the dog put-to-sleep—due to our deep sense of loss, but the idea of our food having soul? Well, you’re hard pressed to find that on anyone’s Top Ten List.

There are a number of reasons why animals have lost their soul. The industrialization of society, the exile of rural people to urban centers, and the mechanization of food have all led to separating people from their food animals. And unlike plants where most anyone can have a little garden, it’s a bit difficult to raise a meat cow in the suburban back yard. Yet, there are two big reasons for animal soullessness: enhanced business profits and low consumer meat cost. The latter is the ring-in-the-human community nose. Attaining absurdly low meat prices at the local market has become so important; folk would rather not question the possibility of their pound of burger or bag of chicken breasts ever having a soul if it means paying a single dime more. This fear of questioning has distanced humans from their natural created relationship with animals and led to forgetting what their ancestors naturally knew—life from which their meat comes is as sacred as their own.

Forgetting the sacredness of animals has misshaped the identity of humans, animals, and creation. Believing ourselves fundamentally different from (what Pope John Paul II in 1990 called) our smaller brethren, has deformed our identity. When we think ourselves as more than and better than the animals we eat, our created identity is distorted. Similarly, by believing and treating steers, chickens, and fish as something less than and soulless, we have misshaped their created identity. This misshaping tears at creations manifest relationship and leaves Creation warped and withering. Recognizing this profound loss is not to argue humans are the same as cows. Rather to declare there is richness in knowing humanity is a unique manifestation of creation, just as salmon, ducks, and sheep are also unique manifestations of creation. When we forget this truth we disrespect Creations soulfulness.

Forgetting our food was once soulful also allows us to forget the act of raising our food is a sacred one. Losing sacredness means our food becomes business centered rather than holy centered. There is great danger in this reality. For when food is no longer sacred, neither is life—the loss of sacred food is the loss of sacred humanity. 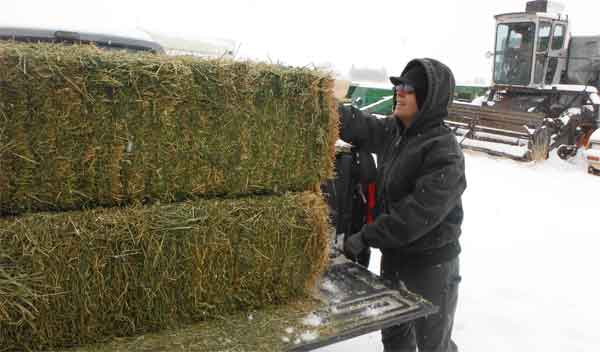 Feeding cattle in the cold is a simple act. Physically both cattle and farmer are healthier for the act of unloading hay. Spiritually? Well, at the farm we think that in the spreading of hay a relationship develops that is not unlike that of preparing a meal, having family sit down at the supper table, and the saying of grace. It is in the act of feeding and eating that life is lived, stories birthed, relationships deepened, and the indwelling of the Sacred is known.