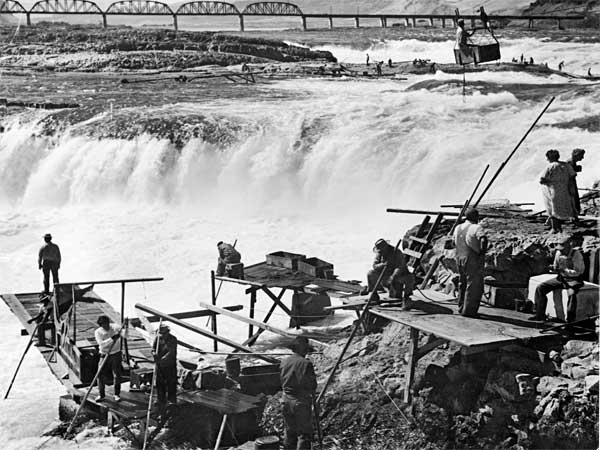 If you were to go back two hundred and eleven years ago last Saturday (October 22) and stand on the bank of the Columbia River at Celilo Falls, you would watch hundreds of fishing families hoop-netting the salmon fall run.  Mid-day arrives and with your kin, you sit and eat in as unending mist rises from the falls turning waters.  The sound and constant mist is a wonder, but that wonder deepens as a group of folk portage the falls—the only place needing portage on this river of Canadian birth.  Word came weeks ago about these people headed by Lewis and Clark traveling west on the river.  However, you have lived long enough now to know what you hear, what you see, and what you experience seldom are a match.

Some two hundred miles upstream from the river’s mouth, these fishers are folk of subsistence. The falls are a natural barrier to returning salmon.  As more and more arrive on their journey to mate, lay eggs, and die in their spawning streams and creeks of birth, the pools below the falls fill.  As they leap and hurdle themselves ever forward over the falls toward embodied spawning grounds men with large hoop nets stand firmly on long-ago constructed family platforms pulling salmon from the river.  Youth gather fish and carry them to women who work carving meat away from bones and hanging it to dry.  Children help where they can, but most run about and play games as children do.  The value of those fishing, gathering, fileting, or drying is the same.  The work is natural work.  Honorable work.  The righteous work of community.

Until the 1930’s, the Columbia did not know a dam. A century and a quarter after Lewis and Clark portaged around Celilo Falls, that all changed.  With significant numbers of non-Indians settling up and down river during the depression 30’s and war 40’s, came also the advocating of dams for hydroelectric and irrigation use.  Though a few non-Indians gave voice to maintaining a free flowing river, or at least a river with minimal dams to hold back floodwaters and provide a measure of power, the public placed their voice on the back forty during the 1940’s war effort.  It was only a matter of time before the great free flowing Columbia River would disappear into a series of navigable lakes and dams.

Just downstream from Celilo Falls, the Army Corps of Engineers began construction on the Dalles Dam in 1952. Folk still fish the traditional dip net and their fishing continued to contribute a significant portion of the people’s diet.  However, the popular 1950 newspaper and radio media gave the Native American voice little shrift.  The Corps closed the gates in 1956 and in April the rising water silence Celilo Falls.  The Columbia River changed forever that day.  As were the Columbia River people.  As was the peoples work of fishing.  For the Columbia River salmon became as tame as the river. 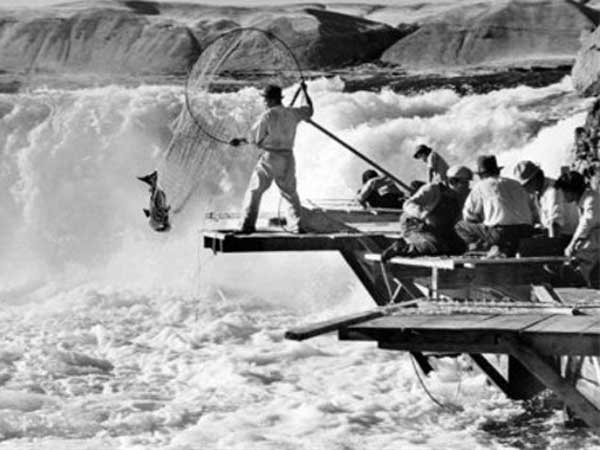 The Columbia’s damming came at great cost to the salmon. Salmon numbers dropped so fast that by the early 1960’s the Federal government and Columbia Basin states engaged in an enormous restoration effort.  Soon hatcheries up and down the river were releasing hundreds of thousands of hatchlings.  Those hatchlings, though, never developed the vigor and immunity to disease of wild fish.  Yet, in time, they bred with the wild salmon of the river.  Today, wild salmon are less than 30 percent of Columbia River salmon and their fall and spring returns linger at 10 percent of the river returns of the 1800’s.

The wildness of life in the northwest is hard to find any longer. The loss of wild rivers and wild salmon are only a footnote of the loss landscape wildness.  There is even a taming of the wind as windfarms take up massive landscapes for their machines.  Folk are losing their own wild life as fewer and fewer day hike or backcountry hike the ridges, mountains, and deserts who lean up against their suburban and urban homes.

Friends have written about the lack of climate change conversation during the presidential debates. I am not sure why.  I am not all together certain what fear lies in the conversation.  However, I believe is it such lack of conversation that has decimated the salmon returns throughout the west.  It is that lack of conversation, which has led to massive wind and solar farms.  Not talking about the environment has disengaged too many from the landscape and the natural wildness of their being.  That is too bad.  For the landscape has the ability to return to wildness and assuredly will one day.  The water and wind are surely in cahoots with one another and when they get together, as anyone who has known the upheaval of a tornado, cyclone, blizzard, or hurricane will attest, wind and water will return the landscape to its wild state.  Taming the landscape is an illusion.  Returning to wildness is not.

As wind blows and water flows, there are questions before today’s people.  Are we willing to become wild again?  Can we let go of the myth that the landscape is ours to hold dominion over and to tame?  Will we learn to do with less energy?  Will we reenter relationship with the landscape?  Is it possible to know the salmon as kin, again?  Can we hear the spirit of the water?  of wind?  Is the wild to be lost in our generation or can we choose to live so our children’s children might be wild again?