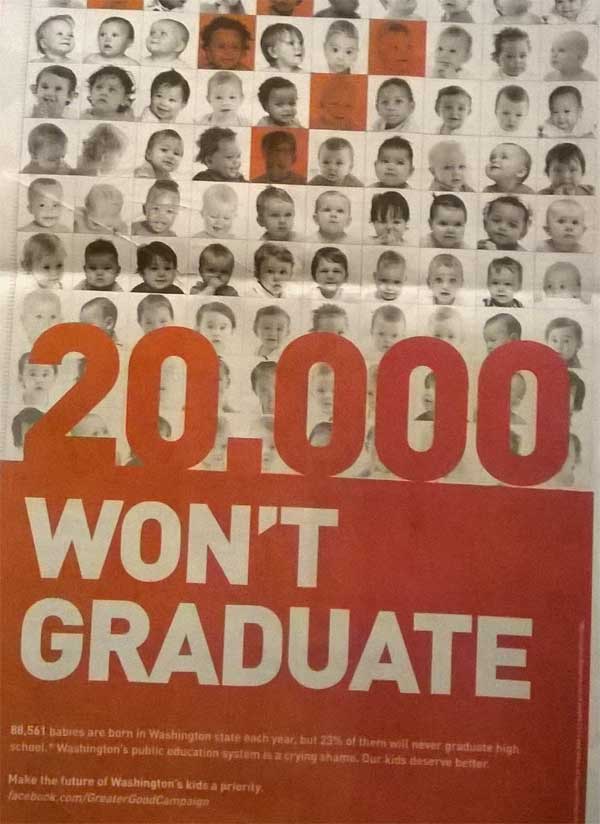 The mamma cow nudged her calf away as I and the dog neared. On down the fence line another yelled at her calf for hanging out near the fence. As we walked, another pushed three calves until they followed her into the field. Mid-winter walks mean most calves are birthed and on the ground learning what it means to be calf.

Being herd critters, cows teach calves how to be herd members. While cows take care of their own, they are not above nudging another’s calf into attention. Instinctively, they know the wellbeing of the herd is dependent on knowledge gained by their neighbor’s calf as well as their own. Herds survive only if they know and engage this simple principle—the wellbeing of my calf is dependent on the survival knowledge my neighbor’s calf. When this principle is not learned, the herd suffers.

Thursday morning, I arrived at the local coffeehouse—a time to catch up with folk, meet new folk, and get a little work done. A friend shared a full-page ad in the Seattle Times taken out by The Greater Good Campaign—coffeehouse mornings mean I don’t have to read every paper to get insights from the local paper, The Seattle Times, and The Wall Street Journal. The ad noted that 20,000 Washington students will not graduate high school this year.

My friend noted that 20,000 students is the combined population of Wapato, Toppenish, Zillah, and Granger—the four most populace towns on the Yakama’s eastern border. Imagine what it would be to have four towns without a single high school graduate. It also takes little imagination to figure this is neither the first nor last year this will happen—Five years (an exaggeration?) equals 100,000 students! Figuring 20,000 is two-thirds the number of employees at Boeing’s Everett facility gives a good idea of the financial stability of the community were Boeing to depend on the 20,000 for next year’s employees.

When 20,000 seventeen and eighteen-year-olds do not graduate high school, we adults have to admit it is not their fault but ours. We have not been good mammas and daddies to the heard. We have not taught our calves to move away from the fence, find good forage, or know the safety of the herd. Worse still, ten years down the road we will be telling 20,000 adults, who cannot obtain a good paying job, find adequate housing, or acquire good food and health care, the fault is theirs!

Basic education is critical to the wellbeing of the herd. If for no other reason than selfishness, making sure our neighbor’s children receive the best education possible is critical to the wellbeing of society. Which also means the herd must pay closer attention to adequate housing, healthcare, and food for all our children, for one informs the other. It means we must pay closer attention to social and institutional structures that serve some of our children while leaving others fending for themselves. It means those of us who live adequately to well must begin paying attention to our neighbor, their child, and seriously question where I will help today!

Tomorrows hope lies in humans learning to treat our herd at least as well as cows treat theirs.