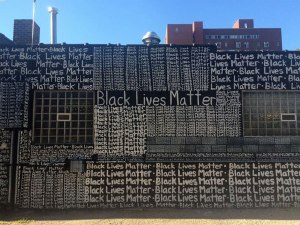 September and October are months of anti-racism workshops. That is not the case every year, but this year they have been months of engaging, wondering, and thoughtful conversation. I find facilitating these workshops has changed over the last fifteen years. Years ago, folk showed up to engage in this wok because this is something I am supposed to do (and in some cases, they were required to by their organization). Today more folks show up because this work really matters to me and the wellbeing of my neighbors of color and my children.

Some of that change is due to the visceral gut—somethings got to change—that has permeated much of US society since Ferguson and the shooting of Michael Brown. Events over the course of this last year have led many folks to conclude the civil rights movement simply ended in the late seventies with the work of racial justice far from completed. The rise of young people in groups like #BlackLivesMatter and Idle No More, are calling for US society to renew themselves to the work of racial justice, and son-of-a-gun, folk are noticing that People Of Color (POC) and American Indians continue to struggle and die because of unjust perceptions, laws, and regulations. More so, the reason this work really matters to folk seems to come from understanding the repeated injustices they have seen this year (from phone videos to police cameras) are modern equivalents of Selma hoses and dogs. (In other words, Michael Brown, Trayvon Martin, and Antonio Zambrano-Montes are our Emmett Till’s and the evil this generation has to own.) What is coming into focus in 2015 is our government, systems, and institutions continue to maintain rules and laws that promote a normalcy not only where POC and American Indians are treated differently than White people, but where that normalcy is right, correct, and moral.

All of which has me thinking of two questions, one old and one new, that come up in anti-racism workshops. Old one first.

“I wish we would come up with a more positive word than ‘Anti’ when talking about racism.” is a comment I have heard from White folk since I first began facilitating anti-racism workshops. One would think linking the word anti to racism would be thought of in the positive. That is not the case. I first experienced the perceived negativity of anti in the Christian Church (Disciples of Christ). When first renewing a commitment to anti-racism work in 1998, the Office of Reconciliation called this work Anti-Racism/Pro-Reconciliation. It was not long before White folk felt pro-reconciling should precede anti-racism in the labeling of the work. The comment often heard was the word Pro is so much more positive. Recognizing funding matters and much of that funding comes from White folk in the church, it was not long before the Office of Reconciliation (understand I—a white guy—is in the midst of this decision making) changed the name of this work to Pro-Reconciliation/Anti-Racism.

Why is it that White folk experience “anti” as a negative? While an answer to that question needs a conversation and more space than allowed here, I find it fair to say White people know they gain privileges, from the existing system that governs society, which people of color do not. And while they did not ask for this privilege and may not want it, the visceral experience of anti is being anti themselves. So while reconciliation cannot occur before acknowledging and engaging in anti-racism work, pro-reconciliation is given priority to anti-racism because it allows White folk to feel this work is not about their created being.

Some will attribute problematic events and instances to the movement. For my money though, every meaningful movement has edges that don’t fit the mainstream of the movement. That can be said of the 1960’s Civil Rights Movement, the 1770’s American Independence Movement, and the 30’s Jesus Movement. No body of people nail it all the time and nobody can account for everyone who believes in deep and meaningful change.

As a White person, it is important for me to recognize US society is by no means living out a state of equality or fairness. And though the inequality that benefits folk of my skin color, like my children and their children, damages the creative being of all US people, it is killing people of color, American Indians and Alaskan Natives. All of which is why it is good to see more folk taking an interest in current anti-racism efforts.

At the end of the day, it is important to have all folk at the table questioning and challenging one another. For racism in the US is hard, dirty, and messy and it will take all people to tear it out by the roots and destroy all manifestations of it. The work is risky, the work is hard, but it is work when done together is righteous, caring, and loving.