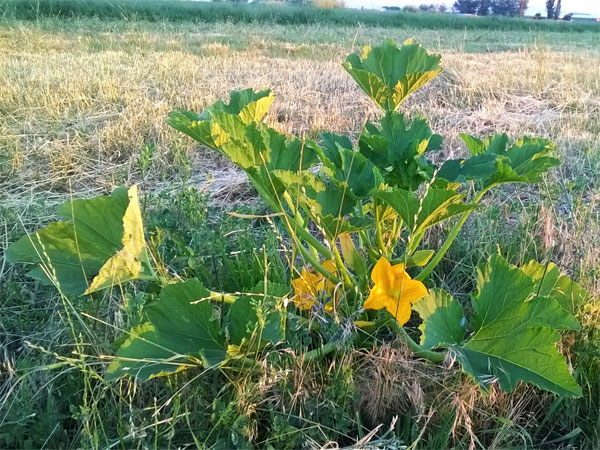 We rotate cattle from pasture to pasture. As long as their numbers are balanced to land, rotational pasturing allows for healthier pasture, abundant grass, and more cattle per acre.

After five weeks, we began our second pass through the pastures a week ago. A week later we moved the cattle to the next pasture. With the grass and weeds eaten down, we found a zucchini squash plant blossoming in the middle of the eaten pasture. Standing by itself, green leaves, yellow flowers, and a couple zucchini, the cattle had eaten around the plant without a bite taken. Given who cows are and given the zucchini plant’s poky nature, perhaps it isn’t too surprising the cows left it alone.

My reaction to finding the zucchini in the middle of the pasture was one of surprise. When I told Belinda later she thought I was trying to get something past her. But there the plant grows, out of place, a good eighth mile from our garden.

Each summer, we cut up leftover squash and throw it out to the chickens. They do a fair job of eating all the meat, leaving only the skins on the ground. I imagine a chicken walked out into the pasture last summer and while turning over cow pies looking for bugs pooped out a seed or two. With water, a bit of soil, and natural fertilizer, the seed obviously found a home suited to its growth.

The unrelenting need to reproduce is amazing. Whether it humans, animals, or plants, life does not give up until it recreates itself.

The cattle may have left the zucchini plant alone because of the sticker-ness of the plant. It just might be though, they too are amazed to find a zucchini plant in the middle of their pasture. Or maybe they also find it a simple gift to have yellow flowers in their midst. Perhaps I give the cattle too much credit, yet I’d rather than not live with the idea the world is better off believing cattle are as wanting as ourselves to have a bit of unusual beauty in their midst.