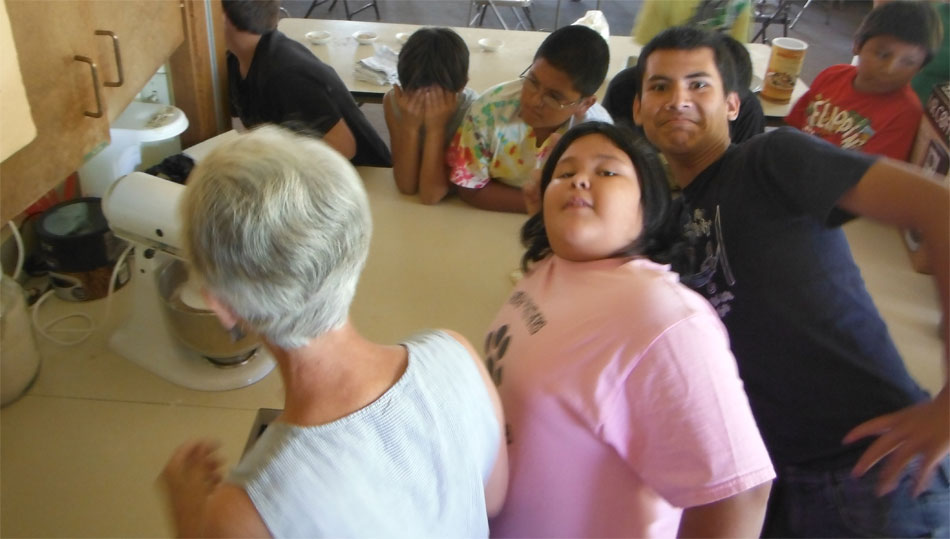 An interesting day bubbles up when youth—pre-school thru sixth-grade—make bread together.  With the phrase on the white board saying “There is a Fungus Among Us” youth entered the kitchen full of flour, mixers, and yeast.  Most everyone has made fry bread or tortilla’s but loaf bread was new.  No one knew what to expect!

A line of bowls with grain in various forms of processing strung out before them.  Beginning at one end a bowl held wheat grain taken from a local field just that morning.  Mid-way stood a bowl with rough-ground wheat flour.  Then as they reached the other end they came to a bowl of ground, bleached white flour.  A talk ensued about the process of attaining bleached white flour from grain, but interest walked the edges of the talk…the youth wanted to get their hands into the middle of some dough!

Ingredients flew into the bowl as conversation continued concerning the abundant life of yeast.  Disinterest blossomed into curiosity as yeast, water, and sugar bubbled.  Attention centered with the adding of flour and a sponge formed.  But when they added more flour, grain, and blobs of dough doubled and tripled, well, amazement settle in—How could that be?  Where talk had once been non-relevant, chatter entered the kitchen—yeast, really?, little unseen bug-like things growing, splitting, multiplying?  That’s just weird…!

Finally the dough entered the oven…and there was nothing to do but wait.  So what do you do when you have to wait.  Run out to the playground, what else!

As youth came into the dining area for lunch, the smell of cooked bread greeted them.  Sitting down, they found a fresh slice of bread, which they had made, at their plate.  And for the first time this summer, everything…yes, every single piece of food on every plate, was eaten.  Estevan said it best, “this is the best bread I have ever eaten, can I have another piece!”

Perhaps it is a small observation, but an observation just the same.  Food, made by oneself, in the kitchen, tastes better than that processed in factories.  What Estevan and others learned is a reminder for many of us; food is a cut above when we take the time to know what goes into making it, and it simply tastes better when we make it ourselves.